Kerala is known as “God’s Own Country” not just because of the beautiful landscapes and greenery spread across the state but also because of the rich cultural heritage. Temple festivals are quite unique events, probably can be seen only in Kerala. Unlike many other religious festivals such as Deepavali or Shivarathri, these festivals are rather social celebrations than religious rituals. When a temple celebrates its own festival, people from the neighborhood gather there irrespective of caste and religion. In other words, the temple festivals are not confined to the temples but to the entire locality.

Thrissur Pooram, the largest temple festival in Kerala, which is regarded as the celebration of the state itself is held once in every year on the Pooram star day of Malayalam month Medam (April 14th to September 14th). The legend behind this festival is very interesting.

Earlier, “Arattupuzha Pooram” was the largest temple festival in Kerala. Arattupuzha temple is located about 10 kilometers south to Thrissur and the deities of all temples in and around Thrissur used to be taken to this temple on a specific day with a procession of caparisoned elephants. There at Arattupuzha, all such individual processions will join together and the people gathered there used to enjoy the traditional drums by hundreds of artists.

Once, some temples located in Thrissur could not reach at Arattupuzha on time due to heavy raining and they denied the chance to participate in the festival. Hurt by the denial, they came back and approached the then King of Princely State of Cochin, Raja Rama Varma (Better known as Sakthan Thampuran). Known for his bold decisions, the king arranged another festival in the premises of Thrissur Vadakkumnatha Temple.

He divided ten temples located in and around Thrissur town into two groups lead by two major temples, Paramekkavu and Thiruvambadi. These two groups will assemble in the premises of Thrissur Vadakkumnatha Temple on the Pooram Star Day of Malayalam month for Thrissur Pooram. 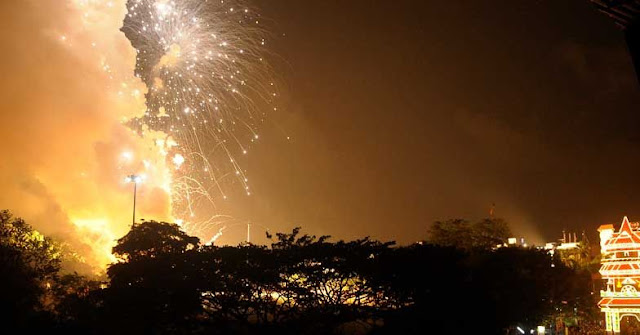 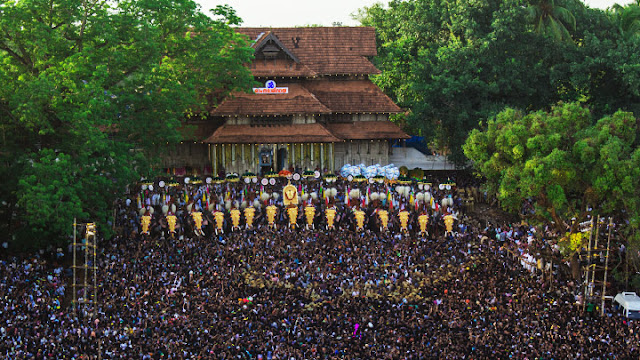 Thrissur Pooram is a seven-day festival and as many other temple festivals will start with flag hoisting. On the fourth day, there will be a “Sample Vedikkettu” which is a miniature display of fire crackers which are supposed to be displayed on Pooram Day.

The main festival is on the sixth day when the senior most person of the Cochin Royal Family or his representative along with the chief priests of two temples, Paramekkavu and Thiruvambadi visit the Vadakkumnatha Temple in the early morning and pray to Lord Shiva to remove all obstacles. By that time, small processions from different temples will start coming to Vadakkumnatha Temple. By noon the major participants, Paramekkavu and Thiruvambadi will come to the Pooram venue in a procession of caparisoned elephants. Each will have fifteen elephants in their procession.

Now, both the team will get themselves arranged in the venue with 15 elephants on both sides facing each other. As the drum beats gain the momentum, the mood will change from that of a festival to a competition. Both the sides will compete in displaying their artistic talents and imagination through the display of different types of umbrellas over the elephants. Once this event which is popularly known as “Kudamattam” or change of umbrellas is over, the pooram will conclude temporarily.

As the midnight passes, the sky over Thrissur starts shining with the fireworks from both the teams. It will last until dawn. When the spectators start moving out of Thrissur on the seventh day morning, denizens of Thrissur started gathering there for the Mini Pooram which is considered as an exclusive festival for Thrissurians.