Pattazhi is a small village in the eastern part of Kollam District in Kerala. It is located just 10 kilometers away from Kottarackara and just 9 kilometers from Pathanapuram. The small village which attracts many people with its natural beauty is more famous for the Devi Temple located here. It is well known as Pattazhy Devi Temple.

The temple is an ancient temple and the legend goes like this. Darika Asura (Demon Darika) has undergone a rigid penance and at the end of it Lord Brahma appeared in front of him. As boon, he asked a favor that he should not be killed by ant gods or men. Besides he demanded the creator that the Brahma Danda, most dangerous weapon too. Pleased with his devotion, Lord Brahma fallen blindly for him and has given the boons he asked without thinking the after effects.
Once gaining more strength with boons, Darika went on creating havoc in the earth. He literally created his kingdom here and all good people found it difficult to live here. When they stopped worshipping, Gods too found it difficult. After a long discussion they planned to undergo rigid penance to please Lord Shiva.
Lord Shiva appeared in front of them and they told the miseries caused by Darika. They also expressed their inability to fight Darika as he is stronger with the boons from Lord Brahma. Shiva got angry with this and he opened his third eye. Flashes of fire came out from it and they formed a female figure. She has been named as Kali as she was in dark complexion. She went to fight with Darika. She had to continue her fight for twenty days and finally she killed him by beheading him. Yet she was not able to control her anger. Taking the head of Darika, she came to the gods with anger. Seeing that, Lord Shiva lied on the ground in front of her. Blind with anger, she could not see him and she placed her legs on him. Realizing that she had placed her legs on her father, she repented and this decreased her anger to a certain limit. 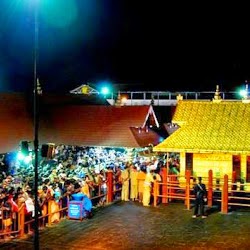 Then she asked her father, Lord Shiva about the aim of her birth. He advised her to go to some serene place and be there blessing the devotees who worship her with great devotion and unselfishness. She went to a village and on the way she saw the Navagrahas. As she was still angree, Navagrahas, the nine planets got feared and they took the form of children. Seeing children, her anger was completely diminished and she asked them to sit with her. Even now the navagrahas are being worshipped in Pattazhy temple, though there are no idols for them.
There was a family called Kutiyam Thuruthil Kizhakke Veedu in this village. They were rich feudal lords of the village and have vast lands and other properties. Once the head of the family was taking walk through his land, he saw a woman clad in white garments. Suddenly she disappeared and there came a open well in that place. A piece of red silk was there on the top of the well. When he had a look inside the well, he saw the water with huge waves just like in an ocean. Silk is called as “Pattu” in the local language Malayalam and “Azhi” is the word for ocean. Clubbing both these the word came as “Pattazhi” and thus the village got the name Pattazhi. 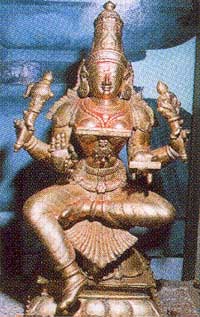 The temple has been taken care of by nine families once. Then a man called “kambithan” came there. He was very powerful and had many divine powers too. He took care of the administration of the temple.
There are many legends about Kambithan. Actually it is a sir name and after the first kambithan there came a second one who was also as strong as the first one. After the second one no Kambithan is here till so far. There is a Shiva Temple which seems to be older than this Devi temple which is located near to this temple. There are two old buildings with single rooms behind this Shiva Temple which are believed to be the monuments of these two Kambithans.

Posted by Unknown at 5:58 AM No comments: