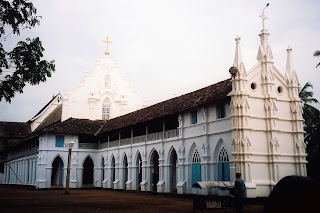 Christianity came to India even before it entered Europe and in India, it is believed to have come to Kerala at first. Common belief is that Saint Thomas, a direct disciple of Jesus Christ visited Kerala after the death of Christ and he converted many people to Christianity.
Palayur and Chavakkadu have prominent place in the history of Christianity in Kerala. Palayur was very famous even before Christ and it has business relations with Egypt, Greece and Arabia. Many Jews used to reside in this small town in ancient times. Although there are now Jews now, there are many structures to remind their presence. Jootha bazaar (Jew Market) and Jootha Kunnu (Hillocks of Jews) are a few among them.
When Saint Thomas got down at Musris, Present day Kodungalloor, he directly went to Palayur as it was very famous then. There many Jews got attracted with his speech and converted to Christianity. Thus, Palayur town became a center of Christianity and it even enjoyed the nick name “Rome of the East”.
At the place where the present day church is situated, there was a temple dedicated to Lord Shiva. Later, when the devotees got converted into Christianity, the temple too got converted as a church. It was in 1607, a modern church has been constructed at the place. Construction has been carried out by an Italian priest Feni Paul.
As mentioned earlier, Palayur and Chavakkadu have great significance in the history of Christianity in Kerala. It is believed that Saint Thomas converted the first Indian at this place. The legend goes like this.
Saint Thomas was traveling through the river on a boat where he saw a group of Brahmins performing death rituals. He stopped his boat and watched it curiously. At the end of the rituals, the Brahmins took water in their hands and threw it upwards.
Saint approached them and asked then why they threw water up. They explained that it was a ritual to get salvation for the soul and at the end when they threw the water up, it will cleanse the soul. Saint Thomas told them he could not believe what they said. He further asked them why the water drops are falling down. His argument was that if the souls are there, the drops should get stuck with them and will not fall back.
When the Brahmins stood answerless, he told them that he can keep the water drops in the atmosphere with his divine power. Brahmins challenged him to show and Saint took a handful of water and threw it up. To the utter surprise of the Brahmins, none of the drops fell down but remained in the atmosphere.
Seeing this divine act, one of the Brahmins expressed his willingness to join Saint Thomas. He took a handful of water and poured it over the head of that Brahmin. That is believed to be the first baptism conducted in India. 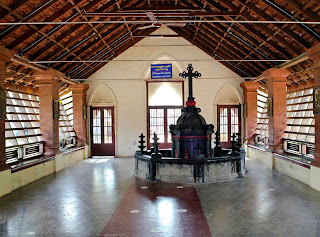 However, the remaining Brahmins could not agree with the one who got converted. They became angry too with his act. They cursed that the place will never develop and they left the place. The place that bearing the curse came to be known as Shapakkadu (Forest with a curse) soon and later it got corrupted to Chavakkadu.
Although the curse was there, Chavakkadu experienced its immense development in the coming years. It became very famous even in foreign countries. However, the invasion of Tipu Sultan changed the fate of this international business center.
Many Christians had to leave the place and had to seek refuge in nearby Travancore during Tipu’s invasion. He even attacked the Palayur Church. Thus, Chavakadu lost its glory.

Posted by Unknown at 4:19 AM No comments:

Thiruvattatu Adikesavan and Azhaka Pillai; a rare story of love and affection between an Elephant and Mahout

Procession of caparisoned elephants is an integral part of any temple festival in Kerala. It is more a Kerala tradition than a Hindu tradition as it is being seen in local festivals related to churches and mosques too. Elephants, largest wild animals in the world have significant role in the history and cultural heritage of Kerala and that is the reason for including elephants in the official logo of Kerala state. 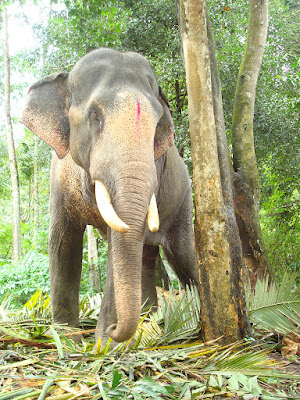 Although it was a practice for centuries to use elephants for procession in temples and for other cultural events in Kerala, a movement is getting stronger against this practice nowadays. Many eminent persons are also backing this movement terming it as an act of cruelty towards animals. Indeed it is a cruelty in some cases whereas it is not in some other cases. There were and are many mahouts who have loved their elephants more than their wards and this story is about a story about the implausible relation between an elephant and its mahout.
As all are aware, Kerala has been divided into several fractions before the arrival of British and each fraction has been ruled by different dynasties and feudal lords. They used to fight with each other to establish their supremacy and to conquer the other. After a long battle which lasted for several days, Marthanda Varma, then King of Travancore subjugated Kayamkulam a nearby princely state. After the victory, King Marthanda Varma visited Thiruvattatu Adi Kesava Temple, which was the family temple of Kaymkulam dynasty. There he found a cute calf elephant. He adopted it and named it after the temple deity as Adikesavan. He appointed a teen aged boy, Azhaka Pillai as the mahout for Adikesavan.
He ordered Azhaka Pillai to keep the elephant at the Thiruvattatu Temple and gave him permission to take elephant to other temples too if they need Adikesavan to take part in the procession. He also gave permission to Pillai for using the elephant in bringing large woods from the forest. On those days, it was elephants that are used to bring huge wood pieces from the forests.  However, the king put a strict condition that on 15 th of every month, Pillai should bring elephant to his palace in the early morning as he wants to see Adikesavan as the first sight of the day on that day.
King has designated a specific place in his courtyard for Adikesavan to wait so that he can see the elephant as he wakes up and open the windows. Azhaka Pillai used to bring the elephant on every 15th and keep it at the place. Then he will move far as he did not want the king to see him too as the first sight. After seeing the elephant, the king will come out and give bananas, sugarcanes and jiggery which are kept ready. Once the King as given him one piece from each item, Adikesavan will move a bit back. This is a sign that he does not want the king to take trouble in feeding him. As the king understands Adikesavan well, he will move back and sit on a chair after giving permission to Adikesavan to have all. Even Azhaka Pillai has been rewarded with clothes and money on those days.
It has been a practice for both the elephant and the mahout and on some occasions, when Azhaka Pillai was not well, Adikesavan had come alone to the palace travelling miles and miles.
Suddenly one day, the King expired and his predecessor, Dharmaraja took the Charge. As Azhaka Pillai knows that the news of demise of king will be hard to digest, he did not inform Adikesavan. The next month, as usual Adikesavan came to the palace along with Pillai. As usual he trumpeted to wake the king. Dharmaraja, the new king did not have the habit of waking up early. Hence the trumpeting irritated him. He got furious and shouted the mahout to take the elephant away.
Experiencing a different treatment, Adikesavan broke down and he ran away from the place taking Pillai in his trunk. They travelled many miles and stopped for a while to take rest. At that time Pillai told Adikesavan about the demise of the King. It was really painful to him and the tears started coming out of his eyes. He did not eat anything. 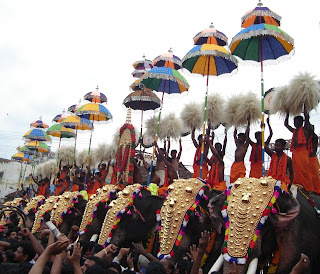 At the same time, back in the palace, when the king woke up, companions told him about the practice of Marthanda Varma keeping the elephant for first sight in the morning. They also told him that Adikesavan might not be aware of the demise of Marthanda Varma and hence he came there as usual. Hearing the details, Dharmaraja too felt bad on his behavior and he sent persons to bring back the elephant. However, Adikesavan was not in a mood to obey royal order.
Seven days have passed and Adikesavan did not even drink water. All these days, officials used to come there to take Adikesavan to the palace. On the seventh day Azhaka Pillai told Adikesavan that it is not a good practice to disobey the royal order. He agreed and went to the palace.
With a great joy on his arrival Dharmaraja offered him bananas, coconut leaves, sugarcane etc but he did not went near the king. Then Pillai told king that the elephant did not have bath for last seven days and if it touched King, he will became impure. Hearing the reason for Adikesavan keeping a distance, King ordered Pillai to take the elephant to the nearby river and to have bath. Adikesavan came back to the palace after taking bath and accepted the materials submitted by his majesty. Then the King ordered to continue the practice as usual but not very early in the morning.
Both Adikesavan and Azhaka Pillai were of same age and both of them were getting weak as they grew older. Azhaka Pillai became very weak and he became bedridden. However, Adikesavan used to go for temple processions and for brining woods from the forest alone. He insisted that Azhaka Pillai should his part of wages. Temple authorities used to come to Azhaka Pillai’s house and present him his part of money. Then only Adikesavan will go there. He never created any mishaps even when he was alone and without a mahout.
Whenever he is free, he used to spend his time in the premises of Azhaka Pillai’s house. One such morning he heard a loud cry from Pillai’s house and he understood that his friend has left the world. He lifted his trunk as if he is paying homage to his friend of the life and moved to a corner in the compound. He lied on the ground and did not eat anything. On that night, Adikesavan too left the world to join his lifelong friend Azhaka Pillai. Both of them were around eighty years old then.
Since his teen ages, Azhaka Pillai never worked as a mahout for any elephant other than Adikesavan and Adikesavan never had a mahout other than Azhaka Pillai. They started life together, lived together and died together too.

Posted by Unknown at 3:18 AM No comments: