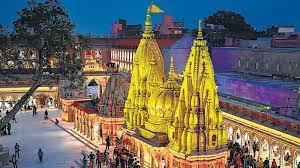 Shri Kashi Vishwanath temple is one of the holiest temples in India and is one of the twelve Jyotirlingas of Lord Shiva. The temple is located on the western banks of the holy river Ganga in the city of Varanasi, Uttar Pradesh. Lord Shiva is also called Viswanath or Vishweshwar and that is why the temple came to be known as Kashi Vishwanath Temple.

Legend of the Temple

Legend of the temple is related to the formation of Jyotirlingas or the radiant symbol of Lord Siva. Once there was an argument between Lord Brahma and Lord Vishnu regarding the supremacy. They approached Lord Siva to find out the right answer.

Then Siva appeared in front of them in the form of a huge pillar of light and asked them to find the end of it. Both Vishnu and Brahma started their journey. When one went upwards to find the top end the other went downward. Even after intense efforts, they could not find the end.

Lord Vishnu came back to Lord Shiva and expressed his inability to find the end but Brahma lied that he saw the end. Angry with the dishonesty of Lord Brahma, Siva cursed him that no human being will worship him instead they all will worship Lord Vishnu. Then the pillar of light has been divided into twelve parts and placed at different places. One among them is in Kashi.

Manikarnika ghat is an important place included in the pilgrimage to Kashi. This place has an important place in Shakteya worship (worship of goddess). When Daksha conducted a huge yagna, all gods were invited except Lord Shiva. As Shiva married Sati, daughter of Daksha against the wishes of Daksha, he was angry with Shiva. However, Sati took it as an insult and went to the Yagasala to question this injustice.

There Daksha insults his daughter and depressed with the act of her father Sati committed suicide by jumping into the holy fire. Furious Shiva went to Daksha and killed him. On the way, he is believed to have come to Kashi and spent some time here. It is believed that he entered Kashi through this Manikarnika ghat.

It is believed that if a devotee can see the linga here, he will get salvation

History of the Temple

Although there is mention about this temple in many epics including Skanda Purana, there is no written evidence to prove when the temple has been built for the first time. The written history of the temple starts with the attack on the temple by the army of Mohammed Ghory in 1194 CE. His commander Qutb-ud Din Aibak defeated the king of Kanauj and destroyed the temple entirely. Then it has been reconstructed by a Gujarati merchant from 1211-1266.

Then in 1669, Aurangzeb destroyed the temple completely and constructed the Gyanvapi Mosque at the place. For a long time, the temple has not been reconstructed. It was in 1742, Maratha Ruler Malhar Rao Holkar attempted to demolish the mosque and to construct the temple there. However, the plan has not been materialized due to the resistance from the Nawab of Lucknow as Kashi was under their jurisdiction then. Again in 1750, Maharaja of Jaipur planned to purchase the land there and to reconstruct the temple. He too failed in materializing the dream.

Then in 1780, Ahilyabai Holkar, daughter in law of Malhar Rao Holkar constructed the present-day temple near to the mosque. Later during 1828, a low roofed colonnade with more than forty pillars was built by Baija Bai, the widow of Maratha ruler Daulat Rao.

Rituals at the Temple

The temple opens at 2:30 am and the following rituals are conducted :

By Air - Indian airlines have a flight to Babatpur airport that is 22kms from Varanasi and 30kms from Sarnath.

By Road - Varanasi is on the NH2 that is found on your travel from Calcutta to Delhi.

Rules of the Temple

● Devotees are not allowed to carry cellphones, cameras, metal items, cigarettes and lighters into the temple.

● The decent dressing is required.

● The police conduct frequent frisking and devotees must oblige.

● Footwears are not allowed.

Distance from Airport to Temple: 24.9 Km